Notice the stairs the Priest is climbing? They are shaped like internal Organs

The Priest looks as if he is presenting her as a spotless sacrifice. The Temple of Sacrifice is located just behind this Priest

Cliff behind the Blue Priest. Notice the purple colors, and how it looks like purple tassels. Also a carved eye.

High Priest, for more info and pictues look under headings of High Priest.

Close up of what the the “Blue robed man” is holding. To me it looks like a women. Some people see a dove.

Most of what we know about Atlantis and Lemuria, comes from the readings of Edgar Cayce. In those readings he described a persons past lives, and called it their ‘Aura Chart’. The person getting the reading was encouraged to paint the picture to remind them of where they had come from and what they had learned in those lives. To better understand what Cayce was trying to communicate, I began to draw and paint these Aura Charts. To my surprise I realized that these “Aura Chart’ pictures were painted on the desert.

I find it interesting that Cayce said there were 3 ways and means to preserve the records. Could one of the ways be, to carve and create full color pictures? Much like the Cahokia in Mississippi?

Cayce Reading 2012-1 “We find the entity was as the leading influence for the considering of ways and means in which there would be the preserving of records, as well as ways, means and manners in which either the few or the numbers might be preserved from the destruction of the land. It would be well if this entity were to seek either of the three phases of the ways and means in which those records of the activities of individuals were preserved”.

One important aspect of this area, is that the “big picture” tells a story. “The path to Ascension”  The blue Robed man is climbing a stair way, To the right of the stairs is where the fertility site is located, as you walk up the stairs a new set of glyphs progresses upward. Showing the stages of man from fertility to adolescence, then adulthood, including the conquering of the beast nature. At the top the Indian head with the lines in his brain is looking into a mirror, as if reflecting over his life. This is parallel to the top of the Blue Robed High Priest.

585-10 Cayce describes a High Priest. And how it should be painted on the entities personal “Aura Chart” Here are exerts from that reading:

“on the left, the priest in priestly robes, blessing a figure kneeling in front of him. The robes of the priest would  be blue gray, with the hooded portion back from the head. The sandals would be of papyrus or woven grass. The robe of the kneeling figure would be in white (this also a robe, you see), 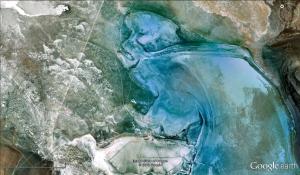 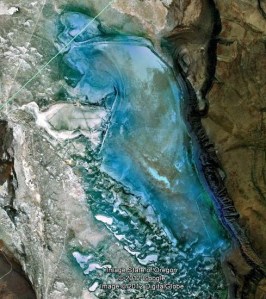 We have to ask ourselves, “Is there any archeological proof?’

In 1938 Luther Cressman, who is considered the father of Oregon Archeology, uncovered 10,000 year old woven grass sandals. To date 900 sandals have been found. These sandals were found at Fort Rock Oregon, which is about 50 miles away from the High Priest. The Cayce Reading below, seems to confirm the date connection.   Remember that Cayce said (585-10)   “The sandals would be of papyrus or woven grass.”

Cayce Reading 5750-1:  From time as counted in the present we would turn back to 10,600 years before the Prince of Peace came into the land of promise, and find a civilization being disturbed by corruption from within to such measures that the elements join in bringing devastation to a stiffnecked and adulterous people.

I would love to know what size these Sandals are. I tried to search the information but so far no luck. I bet they are giant. And they belong to the same culture as the giants in Lovelock Cave, Spirit Man Mummy in Nevada and others. Jim Viera has done an incredible amount of research on the Giants in N. America. I have also found several native legends from the Oregon area regarding giants and the ancestors of the Oregon natives.

Reading 440-5:  As indicated, [See 996-12] the records of the manners of construction of same are in three places in the earth, as it stands today:  In the sunken portions of Atlantis, or Poseidia, where a portion of the temples may yet be discovered, under the slime of ages of sea water – near what is known as Bimini, off the coast of Florida.  And in the temple records that were in Egypt, where the entity later acted in cooperation with others in preserving the records that came from the land where these had been kept.  Also the records that were carried to what is now Yucatan in America, where these stones (that they know so little about) are now – during the last few months – BEING uncovered.4. Ready for questions.”

Reading 440-5  was given in 1938 the same year Fort Rock was excavated by Luther Cressman. Also in the same reading, Cayce mentions the University of Pennsylvania, Luther Cressman was from Pennsylvania. And graduated from Penn State. He also worked in Washington. Also, interesting, Cayce mentions the Firestone. In esoteric traditions, the Oregon Sunstone is considered to be the “Fire Stone” and the only place in the whole world that you can find gem quality sunstones is directly in front of the Blue Robed Priest. Maybe these are all coincidences?

.Book titled: “Atlantis the Mystery Unraveled”   By Jurgen Spanuth   talks about the Blue Robe of the Atlantis Kings. You can read the book at www.scribed.com . The Robe measured 7′ tall. This book was published in the ’50s, and it covers the historical reasons that Atlantis was more than a myth. The author covers the geologic, archeological, and historic records, including the works of Plato. The author discusses The BLUE MANTLE of the KINGS- In the highest festival of the Atlanteans the blue coat, or mantle, is mentioned. It is worn by each of the TEN kings and when not worn were kept in the temple beside the golden table of laws. It is a strange coincidence that such a blue mantle belonging to the 3rd century AD was found during excavations on the Thorsberger Moor in Schleswig-Holstein, it was confirmed that the “technical miracle” of the mantle ties not so much into the 7 foot length but more in the manufacture; two different kinds of weaving were used, as was used during the Bronze Age, 3500 years ago. An interesting note is that the Spirit Man Mummy found in Nevada, also had hand woven artifacts. 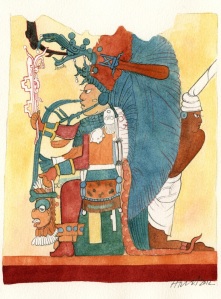 This is a picture of a Mayan King wearing a Blue Robe.

5750-1 With the injection of those of greater power in their activity in the land, during that period as would be called 3,000 years before the Prince of Peace came, those peoples that were of the Lost Tribes, a portion came into the land; infusing their activities upon the peoples from Mu in the southernmost portion of that called America or United States, and then moved on to the activities in Mexico, Yucatan, centralizing that now about the spots where the central of Mexico now stands, or Mexico City.  Hence there arose through the age a different civilization, a MIXTURE again.

Before this we find the entity was during those periods when there were the settlings in the land that is now known as the Northwest, when there were the enterings into this land of those peoples from across what is now known as Alaska or Bering Straits; those individuals that journeyed into the lands now known as the Columbia River section. The entity then was among those whom the strangers from the East met with; that were not the native Indians nor those from across the sea, but the remnants of those people who were of the tribes that were lost or that had journeyed to the land, that had settled in the Aleutian Islands; that were of the Caucasian or white race that settled in the valley, with which Clark came in contact or found there.” The Columbia River is in Oregon, and again Cayce is talking about the lost tribes of Israel. So, I believe this is why we see so many glyphs with Hebrew overtones.

The stones that are set in the front of the temple, between the service temple and the outer court temple – or the priest activity, for later there arose (which may give a better idea of what is meant) the activities of the Hebrews from this – in the altar that stood before the door of the tabernacle. This altar or stone, then, in Yucatan, stands between the activities of the priest (for, of course, this is degenerated from the original use and purpose, but is the nearest and closest one to being found).” 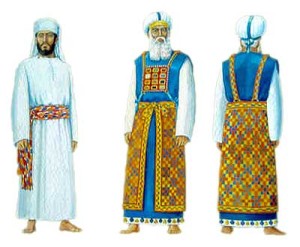 18. Those in Yucatan, those in the adjoining lands as begun by Iltar, gradually lost in their activities; and came to be that people termed, in other portions of America, the Mound Builders.”

Cayce said the mound builders were of Atlantean decent. so were there Mound Builders in Oregon?? Below is an article regarding excavations of Mounds in the Williamette Valley, Oregon.

Excavations in the Calapuya Mounds of the Willamette Valley; Oregon

10.2307/276062
Above book covers the ancient mound builders of oregon.  Excavations unearthed skeletons. Proof Mound Builders were in Oregon.
******************************************************
Quarterly Oregon Historical Society June 1922  Written By: George William Wright LLB   Found on www.jstor.org   Artifacts dug up in the Oregon Mounds, are neolithic and are related to the Mound Builders in Asia and Japan,  mongolian. Also, I have been attracted to one “black” mound I found near white beard.  On page 91 a referance to the mounds that were excevated in late 1800’s that the burial mound was covered with burned items. Ash etc. burnt antlers etc. possible location of important funeral pier of royal or cheiftan.